The development of architecture since the mid-twentieth century has been characterized by many contradictions. While some architects obscured any hint of a building’s structure beneath overpowering reflective surfaces, others expressed structure more overtly than ever. Deconstructivists reinvented buildings, while others emphasized the geometric. Some worked on the scale of total environment while others lead us to believe that small is beautiful.

You know them by their odd-sized and often tall windows, their lack of ornamentation, and their unusual mixtures of wall materials–stone, brick, and wood, for instance. Architects designed Contemporary-style homes (in the Modern family) between 1950 and 1970, and created two versions: the flat-roof and gabled types. The latter is often characterized by exposed beams. Both breeds tend to be one-story tall and were designed to incorporate the surrounding landscape into their overall look. Other notable features include: abstract, geometric shapes; a complex or high-tech structural design. 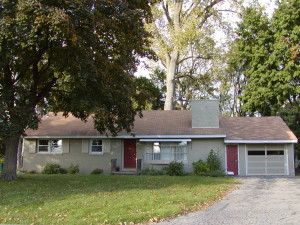 Sometimes called the California ranch style, this home in the Modern family, originated there in 1930s. It emerged as one of the most popular American styles in the 1950s and 60s, when the automobile had replaced early 20th-century forms of transportation, such as streetcars. Now mobile homebuyers could move to the suburbs into bigger homes on bigger lots. The style takes its cues from Spanish Colonial and Prairie and Craftsman homes, and is characterized by its one-story, pitched-roof construction, built-in garage, wood or brick exterior walls, sliding and picture windows, and sliding doors leading to patios.

A Modern style that architects created to sequester certain living activities—such as sleeping or socializing—split levels offered an multilevel alternative to the ubiquitous style in the 1950s. The nether parts of a typical design were devoted to a garage and TV room; the midlevel, which usually jutted out from the two-story section, offered “quieter” quarters, such as the living and dining rooms; and the area above the garage was designed for bedrooms. Found mostly in the East and Midwest, split-levels, like their Ranch counterparts, were constructed with various building materials. Sustainable Architecture Sustainable architecture attempts to balance the needs of society while maintaining acceptable standards of living within the capacity of the environment. Green designers make an effort to lessen the impact of buildings on the environment by re-using existing structure and materials and by creating environmentally friendly, energy efficient structures. They incorporate materials that do the least harm to the air, water, and ground. Sustainable designers often revive traditional methods of building including the use of green roofs, straw bale walls, and new uses for old buildings.