The foundations of Modernism in Architecture were evident during the Victorian era, with industrialization and new technologies paving the way for change. The skyscraper was engineered to answer to the space needs of cities, and architects were scorning the need for adornment, advocating instead a purity of form. Modern Architecture takes on a wide variety of meanings and manifests itself in many different forms. 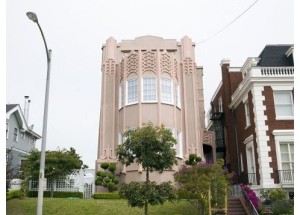 The 1925 Paris Exhibition Internationale des Arts Decoratifs launched the Art Deco style, which echoed the Machine Age with geometric decorative elements and a vertically oriented design. This distinctly urban style was never widely used in residential buildings; it was more widespread in public and commercial buildings of the period. Towers and other projections above the roof line enhance the vertical emphasis of this style, which was popularized by Hollywood movies of the 1930s. Flat roofs, metal window casements, and smooth stucco walls with rectangular cut-outs mark the exteriors of Art Deco homes. Facades are typically flush with zigzags and other stylized floral, geometric, and “sunrise” motifs. By 1940 the Art Deco style had evolved into “Art Moderne,” which features curved corners, rectangular glass-block windows, and a boat-like appearance. Popularized in the United States by Finnish architect Eliel Saarinen, the style enjoyed a revival in the 1980s. The Empire State Building and the Chrysler Building, both in New York City, are in the Art Deco Styles. 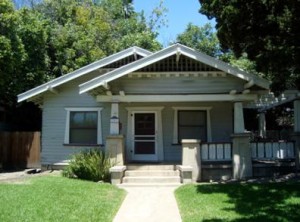 These narrow, rectangular one and one-half story houses originated in California during the 1880s as a reaction to the elaborate decoration of Victorian homes. The style then moved eastward to the Midwest in the early 20th century, where it remained popular until the Great Depression. Bungalows have low-pitched gabled or hipped roofs and small covered porches at the entry. The style became so popular that you could order a bungalow kit from Sears and Roebuck catalog. The name “bungalow” had its origins in India, where it indicated a small, thatched home.

Some of the first houses built in the United States were Cape Cods. The original colonial Cape Cod homes were shingle-sided, one-story cottages with no dormers. During the mid-20th century, the small, uncomplicated Cape Cod shape became popular in suburban developments. A 20th-century Cape Cod is square or rectangular with one or one-and-a-half stories and steeply pitched, gabled roofs. It may have dormers and shutters. The siding is usually clapboard or brick.

Popularized at the turn of the 20th century by architect and furniture designer Gustav Stickley in his magazine, The Craftsman, the Craftsman-style bungalow reflected, said Stickley, “a house reduced to it’s simplest form… its low, broad proportions and absolute lack of ornamentation gives it a character so natural and unaffected that it seems to… blend with any landscape.” The style, which was also widely billed as the “California bungalow” by architects such as Charles Sumner Greene and Henry Mather Greene, featured overhanging eaves, a low-slung gabled roof, and wide front porches framed by pedestal-like tapered columns. Material often included stone, rough-hewn wood, and stucco. Many homes have wide front porches across part of the front, supported by columns. Other notable features include: Rustic appearance with exposed structural components acting as decorative features; Natural, native materials used; An emphasis on horizontal and asymmetrical components; Casement windows, often with art glass. A great example of this style is seen in the Gamble House in Pasadena, CA 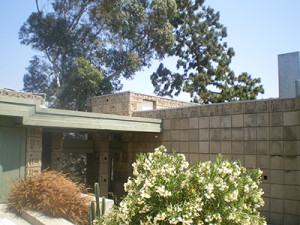 Frank Lloyd Wright sought to create homes that harmonized with their environment while appreciating the practical, technical, and financial constraints inherent in a building project.

TEXTILE BLOCK: Use of concrete blocks offered an inexpensive material with which to build a creative home environment since the blocks could be cast from local sand and poured to any size or shape, then stacked to take advantage of natural light and uneven surfaces of the site.

USONIAN: These homes focused on the uniquely American state of mind and experience that finds the authentic, egalitarian expression in the built environment. Ensuring low construction costs, simplicity of mass production, low heating costs by incorporating radiant-heating elements in the foundation, while never compromising the quality or humanity of his designs, and still making the hearth a focal point. Notable features included concrete slab foundations incorporating radiant heat piping, Natural materials including timber and brick, the absence of attics and basements, carports rather than basements, geometric shapes and limited ornamentation, open plan interiors featuring alcoves, wall seating and other built-in elements.

ORGANIC: A design coined in 1908 by Frank Lloyd Wright, Organic Architecture was one in which natural forms were translated into architectural shapes. The buildings appear to have grown and evolved from their natural surroundings: Interiors are designed to harmonize with exteriors. Crucial to these buildings were the sophisticated engineering techniques that underpinned his buildings, notable cantilevers and such ingenious supports as the dendriform concrete, steel-reinforced, mushroom columns supporting glass roof. 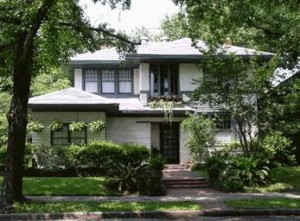 In suburban Chicago in 1893, Frank Lloyd Wright, America’s most famous architect, designed the first Prairie-style house, and it’s still a common style throughout the Midwest. Prairie houses come in two styles–boxy and symmetrical or low-slung and asymmetrical. Roofs are low-pitched, with wide eaves. Brick and clapboard are the most common building materials. Other details: rows of casement windows; one-story porches with massive square supports; and stylized floral and circular geometric terra-cotta or masonry ornamentation around doors, windows, and cornices. Many have large cantilevered terraces and verandahs. The surfaces are generally unornamented. Windows often contain art glass.

Rustic architecture is best identified by our state and national park lodges, although it had its origin in the British Arts and Crafts movement. Notable features include unpeeled-log framing, Thatch or bark roofing; Boulder walls and chimneys; Informal design; Corner notches with exposed log ends; Steep roof lines; Overhanging eaves; Porches with railings of unpeeled timbers; Large fireplaces and chimneys.